Enscape uses ray tracing for its real-time rendering, and almost all the calculations that Enscape performs are being handled on the graphics card (GPU). For this reason, your computer must at least meet the minimum recommended system requirements set out below.

Furthermore, although not a requirement, we do recommend that you use Enscape with dual monitors, as Enscape is optimized to work on a dual monitor setup.

The Enscape 3.3 plug-in is provided for the following host applications:

*Revit 2018 does not support the Enscape Material Library or Enscape Material Editor. Additionally, Enscape is not provided as a plugin for Revit LT  because Revit only allows the addition of third-party plugins in the the full version of the software. This is a limitation set by Autodesk.

On Windows, the Enscape plugin will be installed for all of the above listed host applications by default unless otherwise specified by the user during the installation process. This means you do not require a dedicated installer specific to each individual host application, and you can specify which CAD or CAD’s you want to install Enscape for during the installation procedure.

NOTE: The Apple macOS version of Enscape is currently only available for SketchUp 2021 users until further notice.

Note: There are conflicts with two other Revit plugins: Colorizer and Techviz. To avoid incompatibilities, please uninstall them before using Enscape.

Enscape performs its renders using your graphics card (GPU), but the GPU has to have dedicated VRAM, and not shared VRAM as found with Intel Integrated Graphics chips (this does not apply to Apple computers with M1 chip). If your systems CPU and RAM are capable of handling Revit, for instance, and you have a capable GPU, Enscape should work. A good CPU can speed up Enscape’s loading times. The system requirements to run Enscape, as well as the Standalone Executable files that can be exported from Enscape, are identical.

It is also recommended that your internet connection is fast and stable, and that you should use a direct cable connection and avoid using a Wi-fi connection where possible, as this can slow down the Asset Library loading times.

Note: Real-time rendering performance is affected by the project size, and therefore the following table provides the minimum GPU specifications that we recommend where large CAD/BIM projects are regularly being worked on. Where VR is listed, the GPU’s clock speed (processor) has more relevance than the amount of VRAM, although you should always try to use a GPU with as much VRAM as possible.

NOTE for Windows 11 Windows 11 is now supported by Enscape. Please let us know if you experience any issues when running Enscape under this operating system by submitting feedback via the Enscape Feedback Form.

For the minimum recommended GPU’s listed above, some performance gains are possible if you experience poor performance.

Enscape should work if your GPU is capable of running the minimum recommended drivers listed below. Although we always advise that you should be running the latest available drivers for your GPU, sometimes the latest available GPU drivers can cause unforeseen issues and in such a case we strongly advise that you roll back to the drivers listed here:

If you run into trouble, let us know by using Enscape’s Feedback function or send us an email. There are plenty of different system configurations and we are working every day to support more of them. 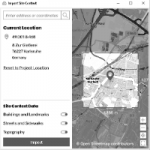